New Posts
Join Our New Group
Electronic E.T.: Intelligent Aliens Are Likely Machines
Is that a EWE.F.O? Mystery as hundreds of...
Science Explained: How Can the Diameter of the...
Elon Musk’s firm Neuralink has the tech to...
ARNOLD SCHWARZENEGGERBEST SUITED TO TERMINATE ALIENS… According to...
NASA’s Mars helicopter completes tests, nears historic flight
Watch a Harvard Professor Explain Why He Thinks...
Why Channel 37 Doesn’t Exist (And What It...
World’s first supersonic unmanned combat aerial vehicle that...
The Myth And Truth About The 13,000 Year-Old...
Every UFO Document the CIA Has Is Now...
Home » FLYING SORCERER UFO hunter claims ‘aliens visited home of Count Dracula’
AliensAmazing PlacesUFO Sightings

AN academic has sunk his teeth into claims that ALIENS landed in Transylvania – the home of the legendary Count Dracula. This ‘painting of a UFO’ was discovered in a Romanian monastery A drawing of the Cerestri UFO and an alien

He claimed a couple saw a gigantic disc rise from a nearby lake whilst visiting the ruins of Poenari – dubbed ‘Dracula’s Castle’ after it was rebuilt in 1459 by the bloodthirsty ruler Vlad the Impaler, who inspired Bram Stoker’s Count Dracula.

At first they thought it was heading in their direction but it moved north towards Transylvania and disappeared over the mountains.

Another case involved police sergeant Marian Mancu and Maricel Rusu, a voluntary guard, who were out on night patrol on July 8, 1996, in the village of Certesti.

At around 12.30am, when they were in front of the police office, Mancu told Rusu he was going back to the police accommodation to get something to eat. The moment he passed the side of the building, he heard a whistling sound and sensed a current of air.

He turned around and saw on the road something “splashing with blue and red lights and making a sound like voom voom”. Artist’s impression of the UFO spotted at Certesti

At first he thought it was a police car but as he got closer he realised it was hovering half a metre above the ground and a small and very strange person was moving around next to it.

He cried “Guard” and saw the horrified guard emerging from a ditch where he had been hiding.

He whispered: “Mister Marian, it is Satan.”

Rusu later claimed that the UFO landed just behind him and he saw three small human like creatures moving around outside of it.

He described them as having white faces, big heads with pointed ears and covered in grey scales. He said they moved “as if they were drunk”.

He stated: “When I saw what they looked like, their very ugly faces, I told myself they are not human. I became afraid and I was hiding myself in the ditch just in case something might happen because I have never seen any such beings in my life before.” After two minutes the UFO rose up and shot off at tremendous speed towards the village of Pochidia.

Dan, 76, believes the witnesses are credible but without proper tests, the truth may never be known.

He said: “It is unlikely the witnesses could invent all the very peculiar details and to go public with them in such a highly natural and convincing manner. It is also unlikely that it could be delusion staged by someone else. Unfortunately we did not have the means to conduct any psychological tests, or lie detectors, but we did not discover anybody with any kind of motivation to invent such a story.

“It would have been interesting to use regressive hypnosis, or something similar, in this case. Unfortunately, in Romania, we face a lack of professionals practicing hypnotic regression and willing to apply it in such situations. Also, even the expenses to arrange such sessions are a real problem.”

Dan believes a medieval fresco in the Monastery Church in the historic city of Sighisoara (Transylvania) could depict a UFO visitation.

The painting shows a large disc shaped object floating above a building, possibly a church, with a beam coming out underneath. 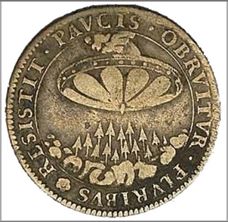 Does this Romanian coin show an image of a UFO?

Under the image is written in German, a passage from Psalm 130.7: “Israel trust the Lord!”.

Gili Schechter and Hannan Sabbath, from the Israeli Extraterrestrial and UFO Research Association, could not find out who did the painting or when.

However the text cannot date before Luther had translated and published the Bible in German in 1534.

The authors noted that the same disc hovering, diagonally divided into sectors and with the stick underneath, appeared on a number of medals from the 17th Century, probably chips used in gambling.

The image has been reproduced in Dan’s new book UFOs over Romania, published by Yorkshire-based Flying Disk Press.

The Pineal Gland: A Stargate To Time Travel

ZERO HOUR: THE SECRET OF THE SPEAR OF DESTINY